At this time, almost every national government in the world has opened the public participation in creating their policies. This is done so that the policy that was created was reflecting the initiation of the people for their own country. That is the current global trend that was explained by Dr. Halimah Abdul Manaf in the Guest Lecture titled “Initiative Assessment of Public Participation in Malaysia Local Government System” in the second floor of B Building. Specifically, Public Administration Program of FIA UB invited Dr. Halimah, an expert of Public Policy from University of Utara Malaysia, to share knowledge of the application of public participation in the local government in Malaysia.

Halimah stated that inside the current developing democratic system, public participation is a compulsory in public policy. She believed that the public already has broader knowledge. “So that the public can be more actively participating in deciding the future, not only complaining and demonstrating in the street,” she said.

Furthermore, Vice Dean of FIA UB, Dr. M. R. Khairul Muluk stated his appreciation in his speech for the arrangement of this event. He believed that people should learn more about public participation from Malaysia as one of the developed countries. In this activity we can learn from our neighboring country. But actually both countries can learn together, so we can grow together,” as he stated. 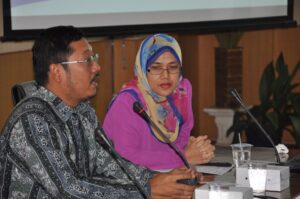 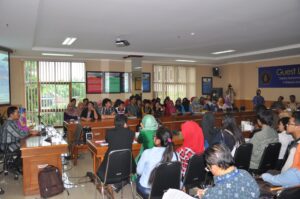 In the end of his speech, Muluk took time to give one of his books entitled ‘Accusing Public Participation in Local Government’ to Halimah. “I expected that this could be reference for the students there,” he added. (ALA/FIA)