The important role of youth, especially college students, in the success of the leadership of the nation in the coming future is undeniable. To impulse the creativity of the students while they are still in their spring time, The Student Executive Council from The Faculty of Administration of Brawijaya University (BEM FIA UB) presented a Seminar and Talk Show entitled “Indonesia’s Youth Inspiration 2014: The Future of Indonesia is in The Hand of The Youth” (30/11). Located in the hall of A building in the fourth floor of FIA UB, the event invited Bima Arya (The Major of Bogor) Muhammad Iman Husein (The President of Indonesia Future Leaders), and Alfi Rachman Waluyo (KPK Representation). 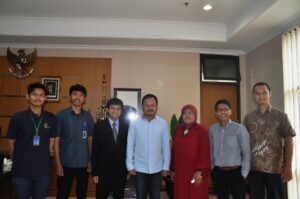 In her speech, The Dean of FIA UB was represented by the third Vice Dean, Dr. Sri Mangesti Rahayu, MS., stated her appreciation for this event. Esti, her nickname, believed that this event could be a good chance for the students to directly listen to the experience of young successful figures. She expected that this event could inspire the youth about how the nation is expected to be in the coming future and how they should act. “The challenge does not only come from this very own society but also from the outside by the existence of MEA 2015,” as stated by Esti.

In this event, Bima Arya also suggested the hundreds of students attending the hall to read a lot so that they could predict what trend that will come in the future. Moreover, The students also have to master the required skills for the time to come. “And college is the best place to learn that required skills,” said the man who was nominated as The Youngest Major in Indonesia. (ALA/FIA)